TREATMENT ON TRIAL: IS IT WORTH GETTING AN IV DRIP? 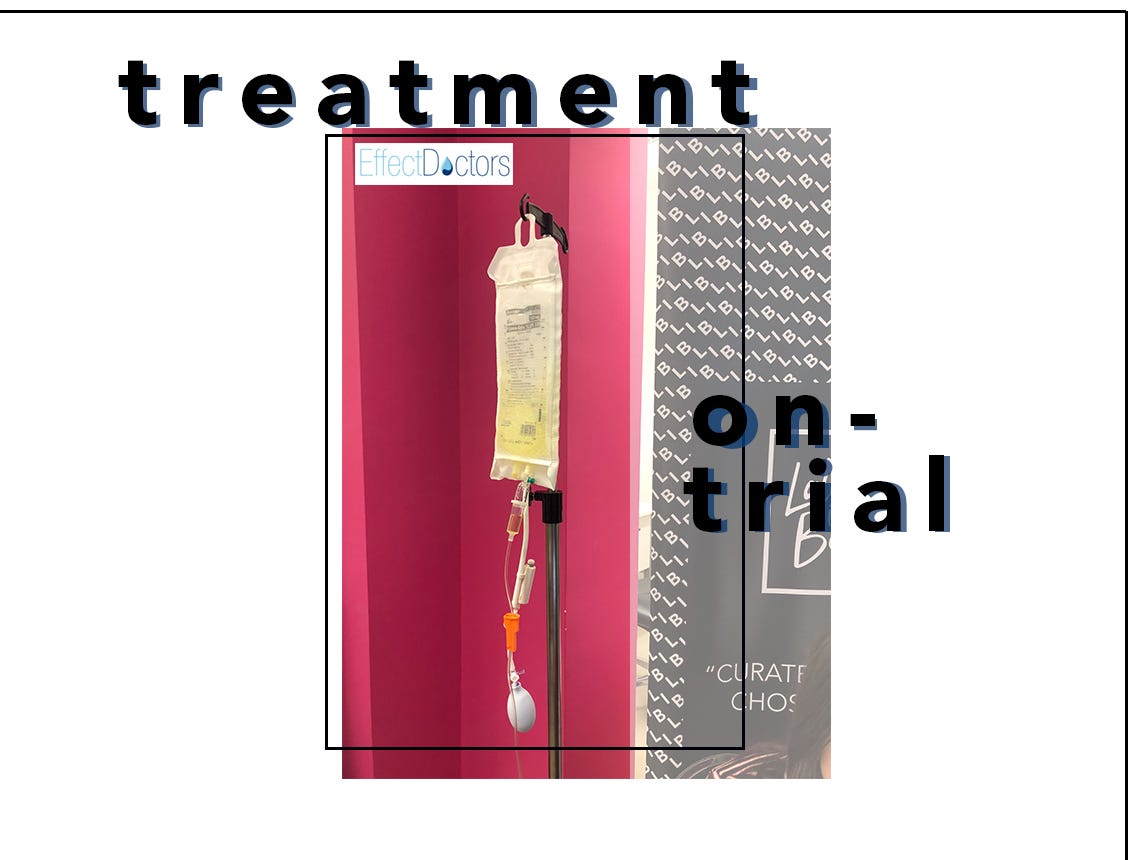 I’m a 27-year-old who’s meant to be in her prime, yet I feel lethargic on a day to day basis. There are many times when I find myself going to bed tired and waking up feeling more or less the same, however much ‘beauty sleep’ I get. There’s probably many factors that play a part in my declining energy levels; my diet isn’t the best, I spend too much time exposed to the blue light of my iPhone just before bed; exercise is my enemy, and my mental health isn’t top notch. Throw in my hormonal imbalance and vitamin D deficiency and you may as well write me off.

Despite relying on Dr. Google for many things, I don’t require a search engine to tell me that I’m perhaps not the healthiest of humans. I’d also like to note that I strongly dislike coffee, which is a proven detriment to my energy levels. So, what could I do to put a spring in my step without caffeine reliance? IV Therapy (aka an IV drip).

Although not overly familiar with intravenous drips, I’ve spotted them cropping up more frequently on the ‘gram’, notably from the world’s more elite individuals. I’ve not had the best experiences when it comes to needles. Not only do I come close to fainting during a blood test, but to say the sight of a drip being inserted into a family member’s hand during chemotherapy left me squeamish is an understatement. You’re probably thinking that the aforementioned doesn’t really make me the best candidate for an IV drip (and you may be right) but the skeptic in me wanted to see what all the fuss was about. 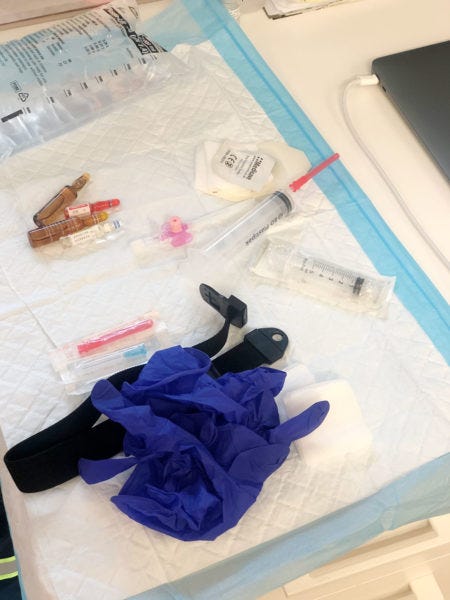 For this month’s Treatment on Trial, I sought the help of Secret Spa, my favourite beauty hub for convenience. Secret Spa have partnered with Effect Doctors to bring intravenous drips, packed with vitamins, minerals and as required medications, safely to your home or – in my case – the office. Carried out solely by Doctors who specialise in IV drug administration, there are a number of vitamin cocktails on offer depending on what you’re after. While The Deluxe Recovery is ideal for a hangover, The Beauty Tonic delivers everything needed for radiant skin. If you were looking to increase your energy levels without relying on caffeine, the Limitless Brain Booster was advised. It was decided – I was going to go Limitless.

The Limitless Brain Booster harnesses the power of NADH, which is said to increase energy and vitality levels, mental clarity and metabolism while having anti-ageing, detox and recovery benefits. Nicotinamide adenine dinucleotide is a coenzyme found in almost every cell in your body. Think of it this way, if you were a car, NADH would be the fuel; it has many cellular pathways and has the potential to work everything – I was sold.

DAY OF THE DRIP 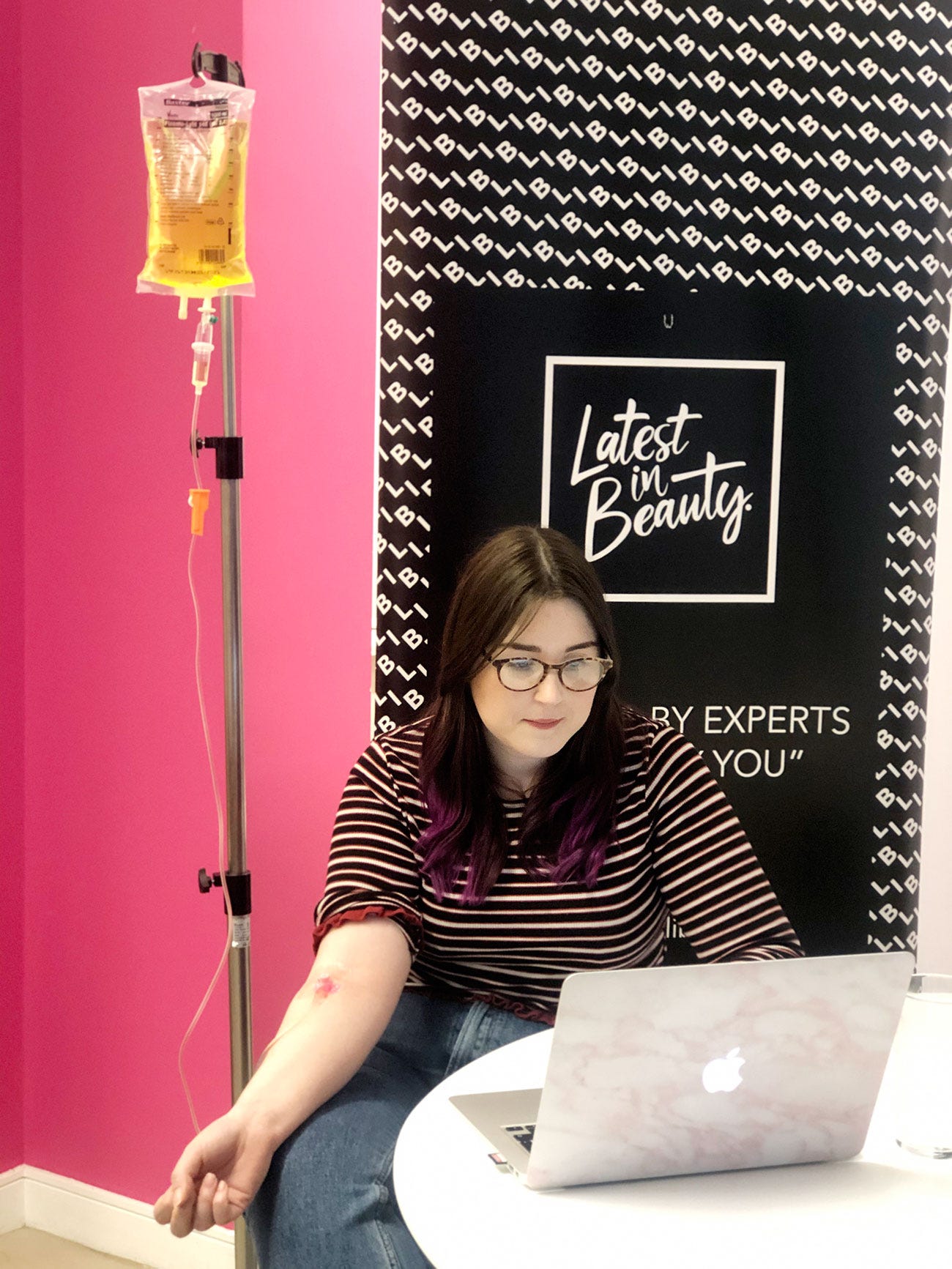 With an overexcited mind and an overactive imagination, I was already visualising myself as a new woman. Would this drip change my life? Will I feel like a completely new woman? It was only when the appointment was drawing closer that I found myself incredibly nervous. Nathan from Effect Doctors arrived at the office and we sat down to talk about the treatment. What was I hoping to feel? What were my concerns? What was going to happen? All of these were clearly answered before I signed the consent form. I had my blood pressure and pulse taken to ensure everything was ok to proceed – as you can imagine, my heart was racing. As I saw the drip being assembled, I started to feel a wave of nausea. How was I going to do this? The wooziness was setting in. I looked away as Nathan inserted the drip and, by some miracle, I was completely fine – it didn’t cause any of the pain I envisaged. Moments later, the first round of fluid was flowing – a concoction of essential vitamins followed by magnesium. I expected to feel this circulating more than I did, but the sensations were light; some cooling, some warming. As it made its way into my bloodstream, I instantly started to feel very hydrated and alert. I’ve always been told I’m dehydrated so this was a welcomed feeling. It was then time for the NADH to be added, which is stored at -15 degrees Celsius and defrosted before administration. It was cold at first, and as I was warned prior, my chest started to feel a little tight – not so much painful, more of a slight discomfort. This soon subsided, and I felt good.

OVER THE NEXT FEW DAYS

It was communicated that the effects of this drip would be subtle, happening slowly over the course of the week. Nathan described the results would be similar to how you’d feel when you start taking care of yourself; eating better, getting lots of rest and staying well hydrated – you don’t feel that instantly, the good feelings come on gradually. The next day I had to get up earlier than normal, and this is where I noticed my body felt different; I wasn’t as groggy as I’d usually be at that time of the morning and I felt like I had more energy to get on with the day. As the days followed, I recognised that I was more alert and was less inclined to grab a sugary snack at the time I’d usually endure an afternoon slump. Things were starting to take effect from the inside, resulting in a less lethargic me on the outside.

A loading course is recommended one to three times for 12 weeks followed by a maintenance course at one to two treatments per month ongoing. It’s not advisable to carry on with a high dose of NADH treatments for longer than 12 weeks.

Two of my colleagues opted for a B12 booster shot. B12 has been reported widely to massively boost energy. B12 deficiency will result in unexplained fatigue, aches and pains, period problems and an increased susceptibility to illness.